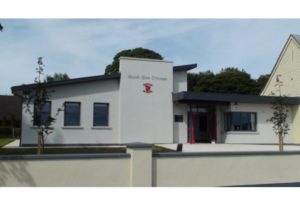 Scoil San Treasa is a mixed primary school, catering for pupils from the age of 4 to 12. Currently there are 134 children on roll, with numbers expected to increase over the next few years. There are five classroom teachers and and two Learning Support/Resource teachers.

The earliest mention of a school at Kilshanroe was 1817 comes from Rev. Dr. M Brenan, 1935, in his study of ‘Schools of Kildare and Leighlin AD 1775-1835′. Brenan refers to a return made by the then parish priest, Fr. Edward Earl to the Royal Commission of Education. For Kilshanroe he reports a school opened in Kilshanroe in 1817. The master was a Mr. Patrick Farrell appointed to the school when opened by ‘the then parish priest’. Fr. Earl reports there being a ‘school-house built of mud and thatched with straw. It is not known exactly where this school was situated however in the ordnance survey map of Kildare 1837; there are clearly two buildings evident beside the oldspacer church. One of these buildings was most likely the school built in 1817.

In 1854 there is a record of the schoolhouse which was 33 feet long by 16 feet wide and 10 feet high. The roof was slated. There were 5 large windows for ventilation. It consisted of one room inside and a dwelling was built beside the school for the teacher, a Mr. Patrick Murray aged 38 years. He had come from Ballinagar NS, Co. Offaly and he brought an excellent reference from that school. The Manager of the school was Rev James Phelan PP of Carbury. The average attendance in 1854 was 24 males and 20 females. The ruin of this school can still be seen today in the corner of the graveyard at Kilshanroe.

The current school was opened in 1960 and extended in 1993 for another classroom, and then extended again much more recently in 2010. Recently the new extension enhanced the facilities of the school and pupils and teachers now enjoy four classrooms equipped with the latest technology of interactive whiteboards and a modern computer room. The extension also provided the school with a secretary’s office, a staffroom and two large store rooms.