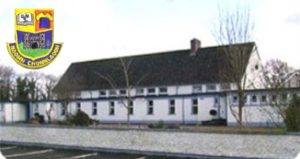 St Conleth’s officially opened in 1961. The school originally stood in the centre of Derrinturn Village, near the church and operated as two schools: a boy’s school and a girl’s school. When the present school was built in 1961, on a site beside the Parochial House, it remained 2 separate schools. Even today, the sign buachaillí is posted over one front door, and cailíní is posted above the other.

In the 1960’s, there were 4 teachers in the school, 2 in the girls school and 2 in the boys school. Miss Abbin was principal teacher of the girl’s school, with Mrs O’Neill as the assistant teacher. Mr McGonnigle was principal of the boys school, with Mrs Darcy, and later Mrs Nuala Dempsey as assistant teacher. Mr Maurice Culhane succeeded Mr McGonnigle as Principal teacher of the boy’s school.

The school is active in a variety of programmes including the Green Schools Programme and proudly flies the Green Flag, having been awarded its first Green Flag in 2006.