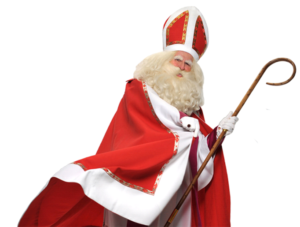 Father Joseph Marquis has portrayed St. Nicholas(and Santa) for over 45 years and founded the St. Nicholas Institute. Father Marquis is a wealth of facts, from familiar to forgotten — like these 19 facts that can help us celebrate St. Nicholas better and appreciate his makeover into Santa. (By the way, Father Marquis will be on EWTN on At Home with Jim and Joy on Dec. 19.)

1. The saint’s name Nicholas is of Greek origin and means “victor of people.”

2. Nicholas was born in Patara in A.D. 270 and served as Bishop of Myra, both seaport towns off Turkey’s southern coast where he lived all his life (and died in 345).

St. Paul passed through them on his way to stand trial in Rome, as St. Luke records that “crossing the open sea off the coast of Cilicia and Pamphylia, we came to Myra in Lycia” (Acts of the Apostles 27:4-5).

3. His remains ended up in another seaport town — Bari, in the heel of Italy’s boot. The Feast of the Translation of the Holy Relics St. Nicholas from Myra to Bari in 1087 is celebrated in Italy to this day on May 9 in the basilica there built as a shrine to him and completed in 1089.

But Venetian sailors who really stole the bones of Nicholas from his tomb in Myra then left behind some fragments, and in 1100 went back to Myra to collect the remaining fragments. Those fragments are enshrined in the church of St. Nicholas on the Lido, Venice, Italy.

5. When Nicholas was born, his parents were serving the needs of the sick. They contracted the same disease as the sick and died. Being the only child, he inherited everything. Father Marquis says St. Nicholas is the first of the saints you can consider a philanthropist in the way he designated his wealth to be used for certain things at certain times. One way is next.

6. St. Nicholas’s anonymous gift-giving originated in his hometown of Patara in Turkey.  According to ancient tradition, to deliver a destitute family of a widower father and his three daughters, who their father was considering to sell into slavery, out of dire poverty, the young Nicholas secretly threw three bags of gold coins through their window on three consecutive nights.

His anonymous nocturnal gift-giving has continued in many countries to today, including being translated into Santa’s visits.

7. The sometimes till used symbol of three gold balls at a pawn brokers’ shops echo this compassionate act. Surprisingly, St. Nicholas is considered the patron saint of pawnbrokers.

8. Saint Nicholas’s compassion for the poor, marginalized and, in particular, children, and especially providing aid anonymously to those in greatest need, became so legendary that it never faded over the centuries, but inspired others, and was imitated especially around Christmas in many countries.

He got to be Santa Claus thanks to a corruption of the Dutch way of referring to him as “Sinterklaas.” The Dutch brought “Sinterklaas” with them to North America in 1621 when they founded New Amsterdam on the tip of Manhattan. English speaking settlers later corrupted the name, which evolved into “Santa Claus.”

9. St. Nicholas is sometimes referred to as the “boy bishop” because he was consecrated Bishop of Myra at the tender age of 30.

10. He was one of the 318 bishops participating in the Council of Nicaea, the First Ecumenical Council of the Church, in A.D. 325. The main purpose was to resolve confusion over the nature of the Son in his relationship to the Father caused by the Arian heresy. The Council of Nicaea formulated the Nicene Creed which outlines basic Christian belief that the Son is “consubstantial” with the Father — the Creed we pray at Sunday Mass to this day.

11. There were times when Nicholas was not hidden or anonymous in helping the afflicted and those suffering unjustly. There are records of him intervening to save three men falsely condemned to be executed by a corrupt magistrate who accepted a bribe. Fearlessly, Nicholas walked up to the executioner and grabbed the sword from his hand. Hence, he was a protector of the innocent.

12. The inspiration of St. Nicholas led French nuns during the Middle Ages to start the tradition of bringing anonymous gifts under the cover of night to needy families and their children on Dec. 5, St. Nicholas Eve. The next morning, the feast of St. Nicholas, the poor families would wake to discover food, clothing, food treats and some modest money assistance.

When the poor tried to find out who their benefactor was, they got the answer, “It must have been St. Nicholas.”

St. Nicholas’s simple act of anonymously delivering those three bags of gold coins that night long ago became an annual tradition that spread rapidly throughout Christian Europe. Since the beloved bishop Nicholas was the Patron Saint of Children, the gifts weren’t limited to the poor, but included good girls and boys.

13. Oranges, a popular treat as a stocking filler even in North America into the later part of the 20th century, was traditionally given by Sinterklaas to children in Holland. The oranges recall the three round purses containing gold coins St. Nicholas threw into the window of the destitute family on those three consecutive nights to deliver them from poverty.

14. The same event was recalled in the chocolate coins wrapped in gold foil that were given to children and still can be seen today in North America.

15. Candy canes have been a staple in America and are associated Santa Claus. Why? They really derive from the crozier, the bishop’s staff, of Sinterklaas, or St. Nicholas.

16. We shouldn’t forget that St. Nicholas spent seven long, hard years, tortured and imprisoned for his faith in Christ under the Diocletian Persecution, until the first Christian emperor, Constantine issued the Edict of Milan in A.D. 313 that gave religious liberty to all Christians.

17. How did St. Nicholas get to Western Europe in the first place? The Emperor of Constantinople’s niece Princess Theophano is considered by historians to be the person most responsible for bringing St. Nicholas to the heart of the Western Roman Empire. She brought a mosaic icon of St. Nicholas for her future husband, Emperor Otto II, as a wedding gift when they were married by Pope John XIII on Apr. 14, 972, in old Saint Peter’s Basilica, Rome.

The holy icon of St. Nicholas that she brought with her for the gift is now kept at St. Johann Baptist Church in Burtscheid, Aachen, Germany.

18. Father Marquis shares two ideas from all this about St. Nicholas that we also need to remember.

The First wonderful reminder is that while the “Christmas Spirit is commonly associated with St. Nicholas, Christians should recognize that the Spirit of Christmas is actually the Third Person of the Blessed Trinity: the Holy Spirit. Because a humble maiden in Nazareth was open to the overshadowing of the Holy Spirit, “the Word became flesh and dwelt among us” (John 1:14); a reality that was proclaimed by “a multitude of the heavenly host” (Lk. 2:13) on that first Christmas.”

19. Second, Father Marquis adds that “Faith-filled ‘St. Nicholases’ and ‘Santa Clauses’ should recognize that we too must be open to the overshadowing of the Holy Spirit in order that God may take on a human nature within each one of us who have been ‘clothed with Christ’ (Galatians 3:27) at Baptism: ‘No one has ever seen God. But if we love each other, God lives in us, and his love is brought to full expression in us’ ( 1 John 4:12).

He concludes, “May the self-same Holy Spirit, Who animated the life of the historic figure of St. Nicholas of Myra, illuminate the hearts of all ‘St. Nicks’ who are also called to reveal the same hope, joy, peace and love to a despairing world: ‘Let your light shine before others that they may see your good works, and glorify your Father who is in heaven’ (Matthew 5:16).