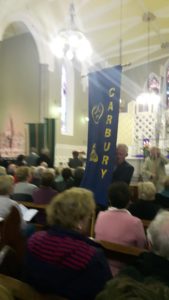 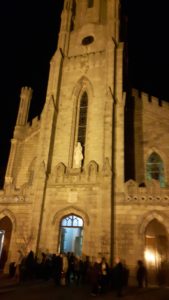 The Annual Chrism Mass will took place on Monday April 10th at 7.30pm in the Cathedral of the Assumption, Carlow.

Bishop Denis and parishioners from across the diocese to joined him for this Mass during which the priests of the diocese renewed their priestly promises and the Oil of Cathecumen, Oil of the Sick and Chrism was blessed and consecrated for use in parishes for the coming year.

The Chrism Mass is the largest diocesan celebration held during the year. In this liturgy priests and people gather with the bishop for the blessing of the holy oils that will be used in parishes in the coming year – the oil of the sick, the oil of Catechumens and the oil of Chrism, from which the Mass receives its name.

THE BLESSING AND CONSECRATION OF OILS

While the Oil of the Sick, used for those who seek the anointing, and the Oil of the Catechumens, used for those preparing for baptism, are simply “blessed,” the Sacred Chrism is “consecrated”. All the priests present participate in the latter moment by extending their hands toward the vessel containing it as the bishop says the prayer of consecration.

The Oil of Chrism is used at baptisms, confirmations, the ordination of priests and bishops, the consecration of altars and the blessing of churches, where the walls are smeared with it in the shape of the sign of the cross.

As part of the consecration of the Chrism, balsam is poured into the oil, which gives it a sweet smell intended to remind those who encounter it of the “odour of sanctity” to which those people and things who are marked with it, and by extension all of us, are called to strive for.

The Chrism Mass also provides an opportunity for the priests of the diocese to renew the vows they first made at their ordination. As a group of ministers gathered with members of the faithful of the diocese they make their public commitment to the service of God, the Church and its people once more.  The people in turn offer their prayerful support of their priests.

A TIME TO GATHER AS A DIOCESAN FAMILY

The Chrism Mass provides us with a moment to gather as a diocese – bishop, priests and people – to support and pray for one another, to remember and pray for the people of our diocese and beyond.

back to gallery
Current Issue Past Issues